Six custom-cut rubies and an equal number of custom-cut sapphires make up the swooping “DC” logo on the 2019 championship rings of the WNBA’s Washington Mystics. 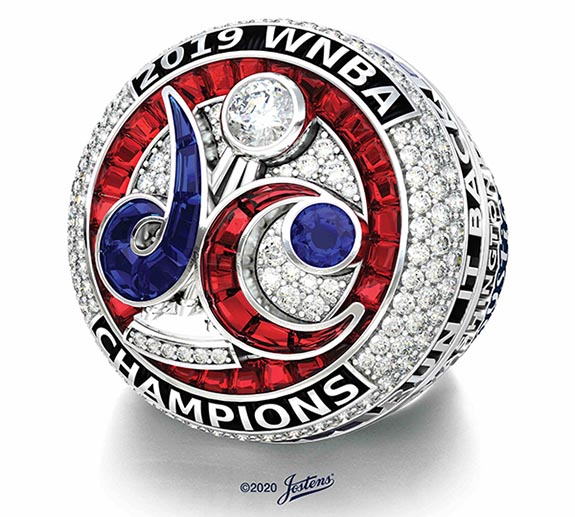 In total, the innovative and symbolic 10-karat gold rings shimmer with 120 diamonds, 35 rubies and 23 sapphires for a combined gemstone weight of 9 carats.

The rings, which tell a story of a historic basketball season during which the high-scoring first-time champs went 26-8 in the regular season, were presented recently to players and coaches in a private ceremony.

Ring manufacturer Jostens explained how the 12 custom-cut rubies and sapphires on the face of the ring symbolize the 12 players on the team’s roster and the singular round sapphire that adorns the “C” represents head coach Mike Thibault.

The colorful logo is outlined in white metal and set atop the WNBA Championship Trophy, which is set in a ground of 23 white diamonds. The trophy has six small diamonds adorning its base. These represent the number of games won by the Mystics during the 2019 playoffs.

Ringing the “DC” logo and the championship trophy are 29 tapered rubies, representing the 26 regular-season wins and the three games won in the finals against the Connecticut Suns.

Completing the top of the ring is a cascade of 90 diamonds and raised white-metal letters against a black background spelling out “2019 WNBA CHAMPIONS.”

The rest of the ring celebrates the players and the city that supported the team on its run to the first championship in the 22-year history of the franchise.

The top and bottom edges of the ring are accented with eight princess-cut sapphires, a nod to the team’s home court advantage at its new home in DC’s Ward 8. The team’s record at home was a stellar 18-3, including the momentous Game 5 victory against the Suns in the WNBA Finals.

The left side of the ring features the player’s name in raised white-metal letters against a black ground. Just below the name is the WNBA logo, the player’s number and the detailed depictions of three DC landmarks — the Washington Monument, Capitol Building and Lincoln Memorial.

The right side of the ring spells out the team’s 2019 motto, RUN IT BACK. The phrase can be traced to May 5, 2019, when coach Thibault gathered his players for a festive Cinco de Mayo-themed meal. During the meal Thibault showed a video of the Seattle Storm sweeping the Mystics to win the 2018 championship. “Run it back” is a phrase represents the chance for redemption.

Also on the right side of the ring is the name of the Mystics hometown, the Mystics jersey logo outlined in the team’s signature blue color and the team’s 2019 regular-season record of 26-8.

The interior of the ring features the Mystics jersey logo set above the playoff series results and logos of their opponents.